Gillian’s Testimonial Back to previous page

My name is Gillian. I’m 17 and I come from Singapore. I am writing to tell you about my story and how your machine, the AlterG, has greatly encouraged and motivated me in my life.

Back in the start of 2010, I was 13 when I was diagnosed with Osteosarcoma at the spine, more specifically at the 9th Thoracic Vertebra. I had to go for an emergency operation to remove the malignant tumour that has been compressing the nerves of my spinal cord. But before everything boiled down, I have been experiencing a sort of a numbing sensation on my limbs – one of the symptoms I was told to look out for other than weakness of the limbs, or loss of control of my bladder and bowel movements. The doctors were still speculating about my diagnosis as the results and biopsies from various tests either turned out negative or “still pending”. Towards the end of 2009, the numbing of my limbs was significantly noticeable. It became hard for me to walk up and down the stairs or even get up from the floor. There were times I needed to be held on both arms to walk up the stairs, as my knee would just give way. I realised my limbs were physically deteriorating. It was frightening to have all these symptoms come at you, not knowing why or how it happened. On the night before my unplanned operation, I went home and discovered that I could no longer control my bowels. I knew that I needed to go to the toilet, but as soon as I sat down, there wasn’t anything for me to control. All the symptoms that I was told to look out for started to surface and it truly worried me. My parents and I planned to make a visit to the hospital the first thing the next
day – the day of my diagnosis and operation.

As we waited for the doctors to assess my symptoms, they had with them the results of my latest open biopsy. I was told the result was positive and when my parents and I learnt of my diagnosis, I had to go for the operation immediately, I had no choice. After 12 hours, the removal of the malignant tumour and that section of my T9 were successful. But I came to know that while the surgeons were performing the surgery, not only did they remove the tumour but the nerves surrounding that area as well. Some of the nerves were severed and the connection between my limbs was lost. I was paralysed waist down. I couldn’t feel or move anything from the T9 section and below. The paralysis was confirmed when the surgeons reviewed me in the ICU, hours after the operation. They asked me to move my leg, my feet, or my toe. I had morphine, painkillers and traces of anaesthesia in my system, I didn’t know whether I imagined my feet moving. But somewhere deep down in what was left of my consciousness, I knew I did not move anything, I couldn’t. A day or two after my operation, the doctors and surgeons scheduled me for intensive physiotherapy sessions. I had to go for chemotherapy as well, to prevent any more unwanted growth. Weeks passed, my parents and I looked for the slightest movement from my foot, and they occasionally asked if I could feel them stroking my feet. Initially, nothing came. My family and I were told to prepare for the worst – that my legs would eventually become a burden. But weeks and weeks after sessions of physiotherapy, a toe moved. That toe gradually progressed to a few toes, and then I could move my feet, my lower limb, and my whole leg. The process seems so easy as I write, but it actually took months of strenuous effort and perseverance. Even the doctors were taken aback by the progress. As for the sensation of my limbs, that gradually came back as well. After a year of treatment, I was still wheelchair bound. My legs weren’t completely back to its normal state yet; I don’t think it’ll ever be completely normal either.

I went back to school in the year 2011, in my wheelchair. I study visual arts in an art school; so not being able to walk didn’t really seem much of a great loss (at least I didn’t dance). I still went for my physiotherapy sessions in the hospital and my limbs were improving very gradually. That year, I progressed from the wheelchair to the walker. My frame of balance was however still much below par. I wasn’t confident walking by myself, so someone always aided me. After a few try walking alone, my confidence was slowly built. By the end of 2011, I could walk by myself. I could only walk, not jump or skip or even run. Just walk. The next year, 2012, I returned to school on two feet, it was a new experience for me. Having sat on the wheelchair for 2 years made me forget how it felt like, to walk.

That year, the progress of my limbs somewhat reached a plateau. I thought that was it, there can be no more further improvement. I was somewhat content with just walking, but never fully satisfied. Being a teen, I craved for physical activities and there were so many restrictions. I became despondent for a while. I stopped my physiotherapy sessions in the hospital. To make things worse, my scheduled CT scan showed abnormal results. I had a relapse. It happened during the later part of 2012. But this round, time wasn’t wasted to speculations and tests, I started treatment early and the tumour progressively shrunk. My family and I decided not to go for another round of operation as the risk of paralysis was high and I might actually die. Instead I went for chemotherapy and radiation therapy. Thankfully, the treatment was able to sustain me until this day as I write this.

The second round of treatment ended around the start of 2013. That was when my parents got to know of this machine, the AlterG. They were introduced to a friend, Joan Law the physiotherapist who was also a spine specialist. She was able to loan the “anti-gravity” treadmill in her clinic, Steps & Providence. The idea of an “anti-gravity” treadmill seemed foreign to me. “There’s such a thing?” I thought. I didn’t know what to expect, but I was completely enthusiastic about the idea of having the chance to feel how it would be like, to walk on nothing. We scheduled my appointment and I met Joan the next week. When I first saw the machine, I felt hopeful, really hopeful. I thought that this could be an opportunity for me to get better. I suited up and got in the machine. I had to wear a back brace to support myself as I ran. We started small, from 5 minutes of walking. Over the year, we gradually increased the time to an hour, until Joan had to tell to stop and get down from the machine. I realised that after being on the machine for months, my stamina has improved and I felt more confident. I was able to exercise “normally” and build the core muscles that has always seem impossible to work on while on land. Being on the machine also gives me that freedom to run and sweat – something I dearly missed. The machine functions like “incline” or “reverse” helped me with my balance, I could register how it felt like to walk up or downhill and reverse. It trained me mentally as well.

The AlterG prepared me as I face the unknown, presented to me outdoors. My family and I love travelling. I even went abroad to Japan for a week during a school trip, but I had to be accompanied by a parent for the insurance to follow through because of my underlying diagnosis. The experience was exhilarating anyway. I told myself that I should never deny myself the opportunity to travel or head outdoors because of my physical limitation; I should keep pushing the boundaries (cautiously of course).

Now in the year of 2014 – close to 2 years after I began my AlterG workout, I could say that I have never expected to come this far. Although I can only just walk, the machine allows me to have an ideal and achievable goal –to run next. I realised, the restrictions we build for ourselves are the only things that keep us from getting what we want. On the AlterG, other than keeping a good posture, there are no restrictions. Therefore, with the help of Joan and the AlterG, I found myself more hopeful and determined to be physically independent. The end is still very unpredictable, but all I need to do now is just try. 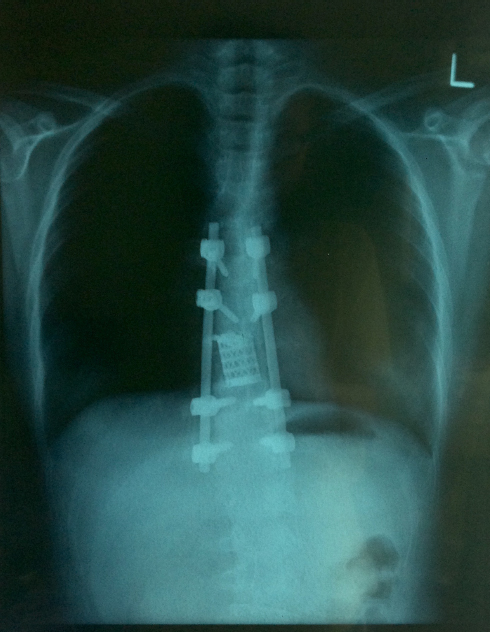 Note: Testimonials from patients are not edited for originality purposes.

Back to previous page